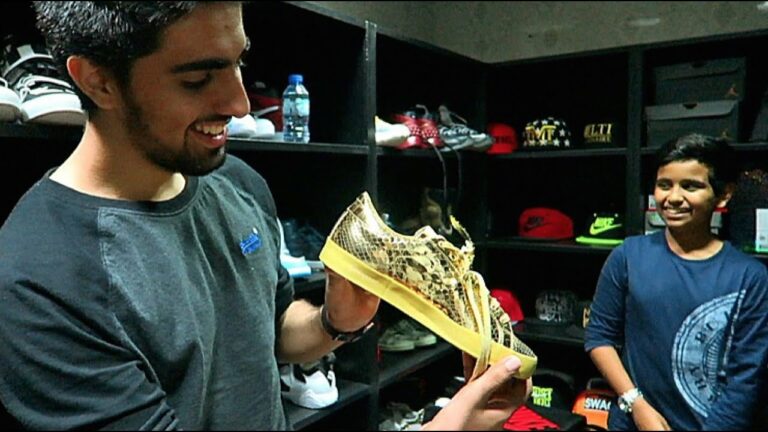 The world’s most famous 18-year-old, Money Kicks, is the son of billionaire Saif Ahmed Belhasa – one of the wealthiest entrepreneurs in the UAE. Money Kicks has grown up living a lavish life and is currently living in a sprawling mansion which has become a tourist attraction frequented by many A-list celebrities.

Money Kicks is the envy of many, and it’s easy to see why. His wealth has enabled him to travel the world, experience incredible luxuries, and live a life that few could ever dream of. But who is Money Kicks, and how did he become one of the richest kids in the world?

Money Kicks is the son of Saif Ahmed Belhasa, a renowned business tycoon who owns some of the most profitable companies in the UAE. His father’s success has enabled Money Kicks to live a life of wealth and luxury. Money Kicks is well-known for his extravagant lifestyle, and often posts pictures of his luxurious vacations, designer clothes, and expensive cars on his social media accounts.

Money Kicks is often seen with some of the world’s most famous celebrities, including Drake, Justin Bieber, and Floyd Mayweather. He is also known to attend numerous high-profile events, such as the Cannes Film Festival and the Dubai World Cup.

Money Kicks’ lavish lifestyle is well-documented on his social media accounts. He often posts pictures of himself enjoying the finer things in life, such as his private jet, luxury cars, and extravagant vacations. He has also been seen wearing designer clothes from some of the world’s most exclusive brands, such as Louis Vuitton, Gucci, and Versace.

Money Kicks also owns a fleet of luxury cars, including a Lamborghini Aventador, a Rolls-Royce Phantom, and a Ferrari 458. He is also a passionate collector of luxury watches, and owns timepieces from some of the most prestigious brands in the world, including Patek Philippe, Audemars Piguet, and Rolex.

Money Kicks’ father, Saif Ahmed Belhasa, is a successful businessman and one of the wealthiest entrepreneurs in the UAE. He is the chairman of several companies, including Belhasa International, which is one of the leading construction companies in the region.

Saif Ahmed Belhasa has been a major influence on Money Kicks’ life, and has provided him with the means to experience the luxurious lifestyle that he currently enjoys. He is also a philanthropist and has funded numerous charitable organizations in the UAE, including the Belhasa Foundation, which supports education and medical care for disadvantaged children in the region.

Money Kicks is undoubtedly one of the wealthiest kids in the world, and his extravagant lifestyle is a testament to the success of his father. Saif Ahmed Belhasa’s success has enabled Money Kicks to live a life of wealth and luxury, and his son is making the most of it. Money Kicks is sure to continue living a life of luxury for many years to come.