Which Country is No. 1 in the World? An Analysis of the Best Countries Ranking 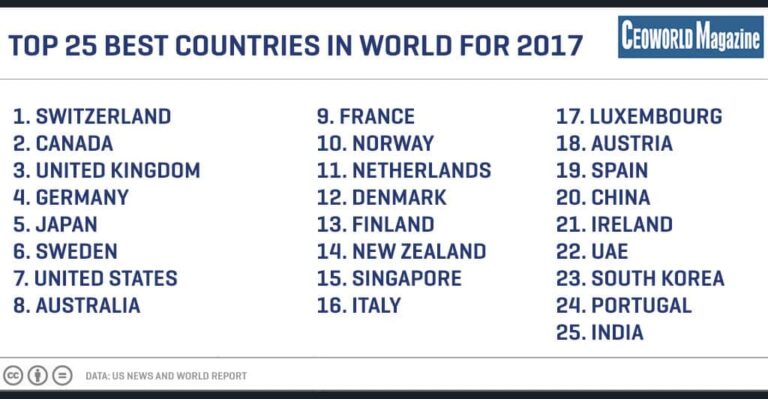 The world is an ever-changing place, and it can be difficult to keep track of which countries are the most successful and desirable. Fortunately, the Best Countries Ranking provides a comprehensive overview of which countries are doing the best in terms of overall performance. In 2021, Switzerland was crowned as the best country in the world, coming out on top in a variety of metrics. In this article, we will take a closer look at the Best Countries Ranking, explore what makes Switzerland such a great country, and analyze the countries that follow closely behind.

What is the Best Countries Ranking?

The Best Countries Ranking is an annual list published by U.S. News and World Report that ranks countries based on a variety of metrics. The metrics used to rank countries include economic stability, job market health, business environment, education, quality of life, and more. The overall ranking is based on the average of these metrics, and the rankings are updated each year.

What Makes Switzerland the Best Country?

So, what exactly makes Switzerland such a great country? One of the main reasons is its strong economy. The Swiss economy is based on low taxes, a well-regulated financial sector, and a highly efficient labor market. This has resulted in a stable and prosperous economy, with low unemployment and high wages.

In addition to its strong economy, Switzerland also offers its citizens a high quality of life. The country has a long tradition of political stability, as well as an excellent healthcare system and high educational standards. Switzerland also ranks highly in terms of safety and security, making it a desirable place to live, work, and visit.

While Switzerland is the top-ranked country in the world according to the Best Countries Ranking, there are many other countries that follow closely behind. Japan is the second-ranked country, followed by Sweden, Canada, and Germany. These countries all have strong economies, high educational standards, and a high quality of life.

The United States also scored highly in the rankings, coming in at No. 7 overall. The US ranked highly in categories such as economic stability, job market health, and business environment. However, the US did not score as highly in terms of quality of life, education, and citizenship.

In conclusion, the Best Countries Ranking provides an overview of which countries are doing the best in terms of overall performance. For 2021, Switzerland is the No. 1 ranked country in the world, thanks to its strong economy, high quality of life, and excellent educational system. Japan, Sweden, Canada, and Germany also scored highly in the rankings, as did the US. As the rankings are updated each year, it will be interesting to see which countries lead the way in the future.